We've already done an in-depth comparison of the different halal ETFs, so if you haven't read that already, check it out first. The first halal ETF to hit the US exchanges was only in mid-2019, so all of the entrants in this space are still fairly new.

And while it's great that we've finally got some halal US-listed ETFs that we can use to invest in the markets, they all come with their own challenges. It's important to address them all so you're well informed of the risks involved.

The first, most obvious problem, relates to the Fund Expense Ratio (or just "Expense Ratio"). The cheapest halal ETF, HLAL, charges a whopping 0.49% / year — that's compared to the 0.02% that VOO charges to track the S&P500. That's 25 times more expensive!

This might seem like we're splitting hairs (since we're talking about small percentage points), but remember that this fee is levied every single year, over the entire amount of invested assets that you hold in the fund. Most investors use ETFs as a long-term investment vehicle — so even small differences in fees compound massively over time.

Let's make this more concrete. We built a simple tool to demonstrate the impact this fee would have on different investment amounts:

The average daily trading volume of the five halal ETFs tracked by Bloomberg is a mere $4.4 million. That's peanuts for any ETF, let alone one that's supposed to be invested in highly liquid, high-quality stocks.

Wide bid/ask spreads can have a significant impact on returns when buying and selling ETFs. Consider the example of SPUS below (this snapshot taken on Oct 24, 2022): 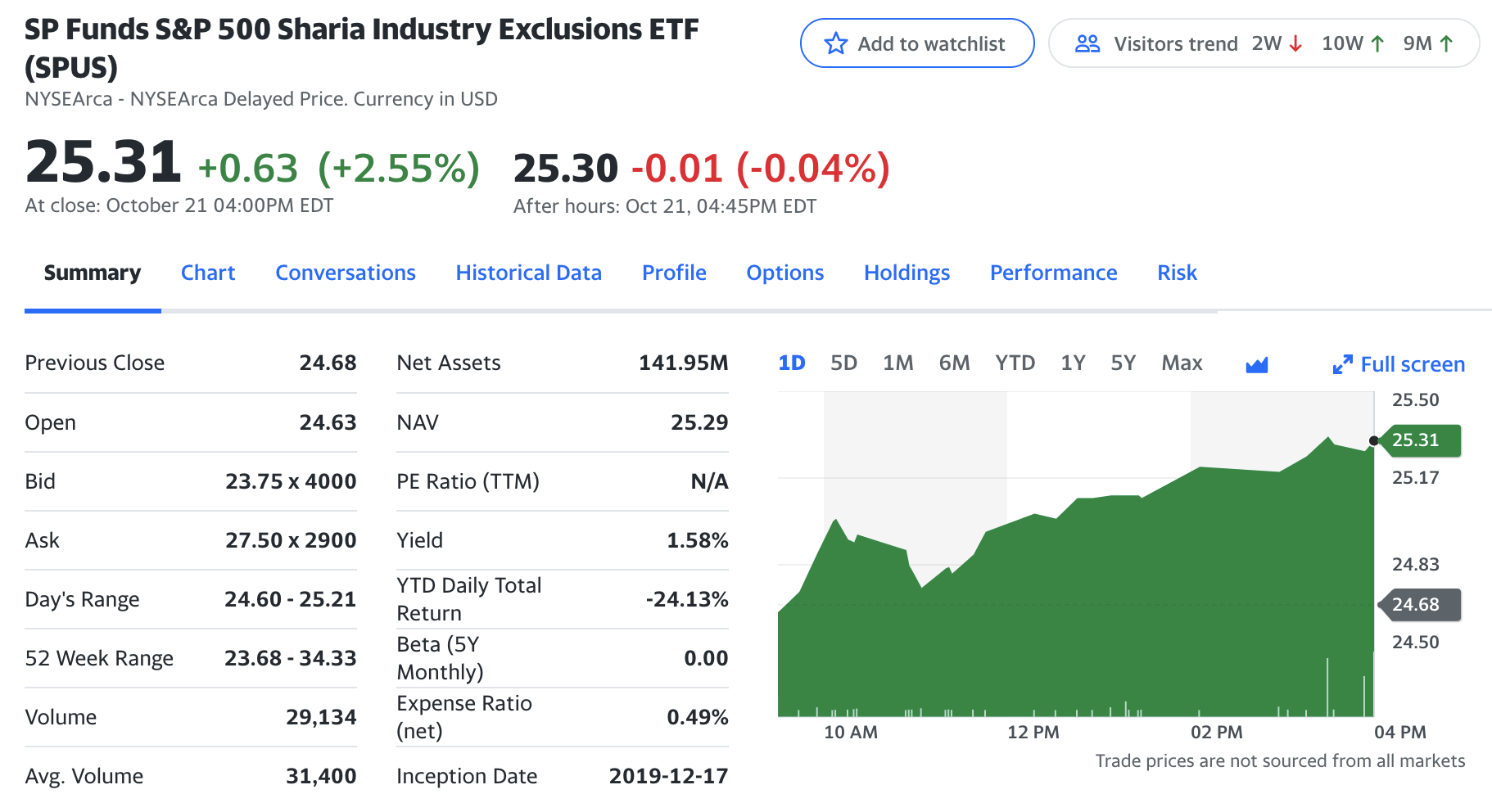 It's also worth noting that many brokers don't offer halal ETFs to their customers and some that do charge higher commissions than they would for conventional ETFs or mutual funds.

Most halal ETFs have a very high concentration in their holdings, which defeats the purpose of investing in ETFs in the first place.

This becomes abundantly clear when you compare the concentration of the Top 10 holdings in each fund to those of the non-compliant equivalents:

The difference is abundantly obvious, with the concentration in the Top 10 holdings almost double that of the non-compliant S&P500. What's more, AAPL is often the highest single-stock weighting. This is despite the widespread news coverage of Apple's dubious involvment with 7 of their suppliers accused of using forced labor from Xinjiang, China. Halal ETFs did not move to exclude them — despite the outcry from many individual Muslim investors.

Up until recently, there was no alternative to investing in Halal ETFs. You just didn't have a choice.

But what if there was a way to create your own ETF?

I don't mean that literally, of course. Creating your own ETF doesn't solve the liquidity issues we discussed. Also, ETFs happen to have a really high legal setup cost (between $500k - $1m/year), so that's hardly a good idea if you're looking for a lower cost alternative.

But hang on a second. An ETF is just a basket of stocks 🧺

You could, at least theoretically, build your own by buying up individual stocks yourself in different sizes to mimic the original ETF.

The obvious problem there is how on Earth would you keep track of that many stocks?! It would be a nightmare to maintain 100s of holdings and keep them synced up with the underlying fund.

What if we enlisted the help of computers to help us track and maintain the list, so that you could trade these "virtual ETFs" just as easily as you would a typical ETF?

A bunch of Muslim engineers with deep software development and financial expertise came together to solve just this problem. 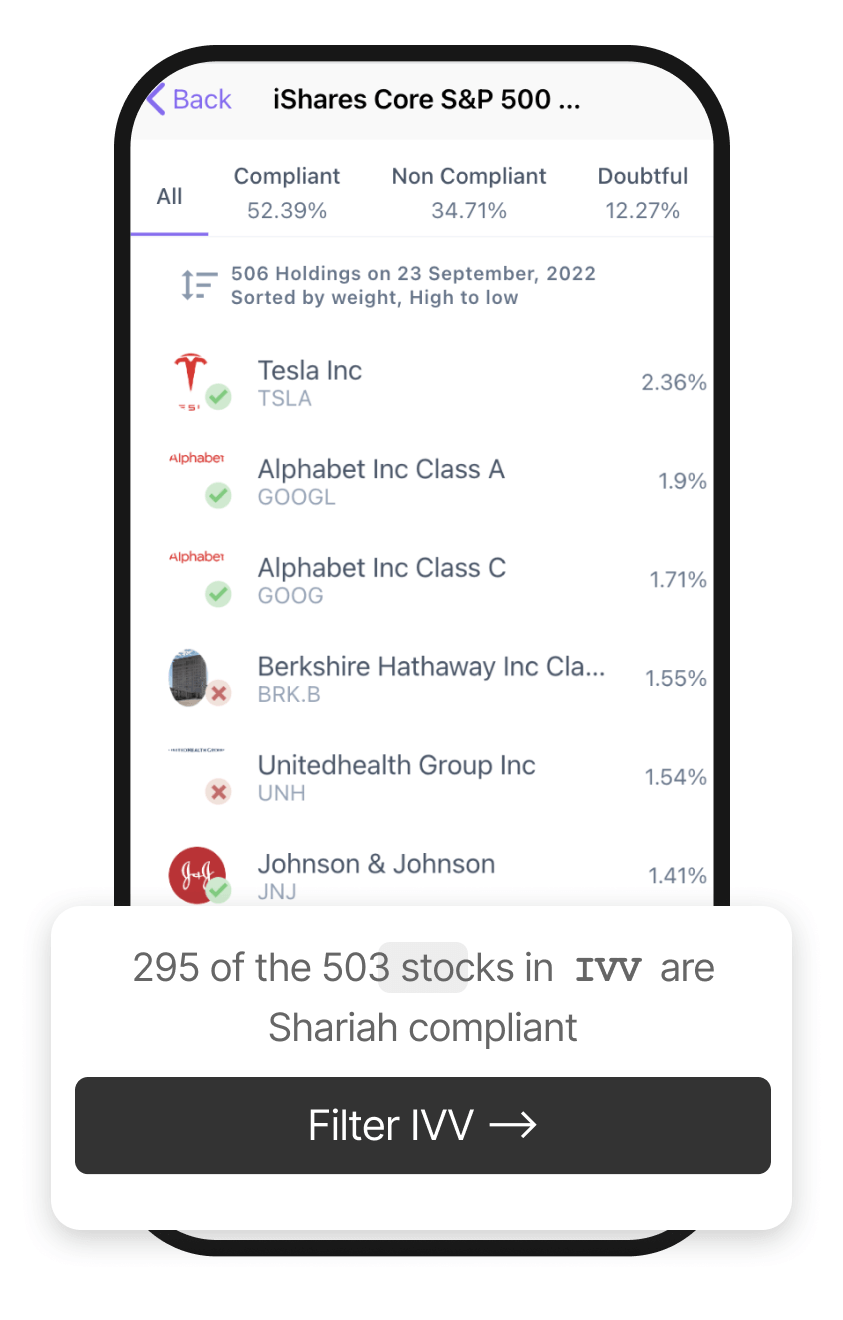 We invented a way to allow individual investors build their own ETFs, from individual stocks — without needing to buy them one-by-one.

You get the advantages of owning ETFs, while still having a say over what gets included into the fund. Also, it solves all the problems with halal ETFs we highlighted above:

Try it out today, it's free to get started.

Previous
← Popular Halal ETFs Compared
Next
Make Your Own ETF →